The Julian: Bringing a project to life through storytelling

As marketers our job is to tell a story. Oftentimes that story needs to be created or written, but sometimes you fall into a project whose story was there decades before you, and your job is to run with it. CASTO’s The Julian was very much the later. 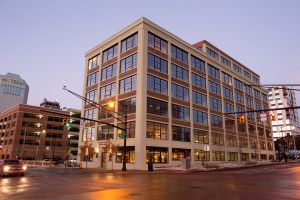 Built in 1921, The Julian was home to The Julian & Kokenge Co. Founded in Cincinnati by future United States Treasurer, William Julian the company would steadily grow into one of the largest manufacturers of shoes in the country. The building at Front and Main Streets in Downtown Columbus remained the headquarters for the Julian & Kokenge Co. until industry shifted overseas in 1975.

When CASTO decided to convert the building into 90 apartments, the question that came up time and time again was, “How do we tell the building’s story?” Some of that answer came easy; we wrote about the history of the building on our website, included it in our printed materials, and named the entire project after William Julian himself. However, what we’re most proud of is how we subtly brought The Julian’s story into various different building features that residents experience every day.

When you arrive at the Julian, you’re greeted by the original brass doors with the outline of women’s shoes engraved into the glass. Step inside the lobby with an industrial décor which includes a custom made table from barn wood and factory door from the early 1900’s, the same time period The Julian was built. The décor reminds you of the building’s history, with ads from the Julian & Kokenge Co. on the walls, while offering every modern amenity apartment residents have come to expect in urban living. 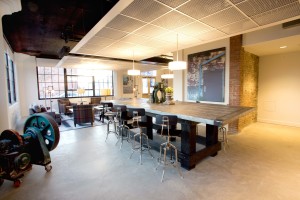 Throughout The Julian are large canvas prints, which at first glance appear to simply be abstract photographs of unidentifiable objects. Look closer and you’ll see that these photos were taken of the building prior to its 2015 renovation. CASTO brought in a photographer to capture the building’s peeling paint, dingy entrances, and expansive open floors and repurposed those photographs into artwork that adorn The Julian’s hallways.

The original steel doors to the stairwells were painstakingly restored or repurposed as more artwork to be displayed at the end of hallways. Equipment and doors from the building’s boilers were hung on the wall and fill in the spaces between the canvas prints. The Julian’s elevators were given the same industrial feel as the rest of the building’s décor.

These little touches and subtle call-outs to the building’s heritage are what we were most proud to develop as a marketing team alongside our interior design team. Working together we created an entire experience beyond a brochure with mention of what the building was in the past. Our residents often list the building’s authenticity, a word every marketer loves to hear, as their favorite aspect of living at The Julian. Call it good marketing, good interior design or both- regardless, we think it’s something William Julian would be proud to have telling his story.

View the video on Vimeo.

About the Author: Hilary Deason is the Manager of Marketing & Public Relations at CASTO, a fully integrated real estate organization headquartered in Columbus since 1926. Ms. Deason is responsible for developing marketing and public relations strategies, and community outreach programs for CASTO’s multi-family development projects.