Guest Blog: Joining #ILookLikeAnEngineer was the Right Thing To Do 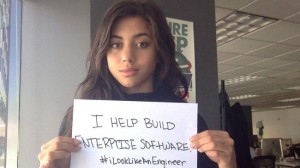 The expression on the young woman’s face grabbed my attention. She wore a vague smile, but her eyes had sadness in them. In the photo on my monitor, Isis Anchalee held up a handwritten sign that read, “I help build enterprise software.” Beneath it, she’d added, “#ILookLikeAnEngineer.”

Now, a hashtag is nothing more than a way to put a label on a tweet. When you include a hashtagged word(s) among your 140-character tweet, it is then filed with every other tweet that contains that same hashtag so you can find that conversation. Some are a joke, like #Monday. But this one grabbed me.

It was the morning of Aug. 5 and I’d just sat down at my desk to begin scanning the internet for mentions of Battelle—usually, my first task of the day as a media relations/social media practitioner. Like a German Shorthaired Pointer in a field, I scan the worldwide web and when I find something of note (positive or negative), I report back to the people who need to know about it.

Often, the stories I find serve as content for our team to post on Battelle’s Twitter, LinkedIn, Facebook and YouTube pages. The Washington Post quoted one of our experts? That’s a great post for us. If there’s a media story about a subject we know connects to work we do at Battelle, we can post the link and say, “By the way, this is what we think or do about it here at Battelle.”

The trending hashtag had a strong connection to education. Battelle has supported and fostered Science, Technology, Engineering and Math (STEM) education, even before the term was used. We believe every student, of both genders and no matter their ethnicity or socioeconomic status, benefits from the lessons that form the basis of a STEM education.

Beyond that, I thought I could connect it to the great people who work at Battelle. Men and women of all ages are engineers of all kinds—chemical, electrical, mechanical and others—each of whom are prized for what they bring to life and the workplace, not their gender. But I also certainly am aware of the gender stereotypes associated with working in scientific fields, and Nobel Laureate Tim Hunt’s recent words seemingly disparaging women in science were still fresh in my mind. We’d posted some of our scientist’s reactions to him in the #distractinglysexy conversation in June.

Some quick research brought me Isis’ story about how she had endured sexist insults during her career. That helped solidify my decision. Sure, posting photos of some of our engineers along with #ILookLikeAnEngineer might bolster our reputation or help with recruiting. The real reasons, however, were even better. It was about truth and fairness and standing up for what’s right. When we opened our doors in 1929, we were charged by our founder to use science and education to help humanity. It’s a responsibility we take seriously, and I know when I throw Battelle’s support behind something, it has social heft.

Minutes on social media can equal days in the real world. Thankfully, our team is agile and not encumbered by an arduous approval process. I told a couple of my communications colleagues about the newly trending hashtag and my plan, and my boss was supportive. Encouraged, I contacted several engineers. Not only were they willing, they recruited others. Soon, my inbox was filling up with pictures from our engineers, some with their own #ILookLikeAnEngineer messages.

I started posting them later that morning and continued to do so for the next few days, both on Battelle’s Twitter and Facebook pages, where hashtags also now are recognized as a way to organize conversations. It was fun, rewarding and we got great feedback. As is most often the case in the short-attention-span-theater world of social media, everyone soon moved on to the next trending hashtag. But I’m happy to say that through diligence and engagement with the social media world, we championed the cause of dignity. We’ll continue to watch for trends that back fairness and equality because it’s what we do as an organization.